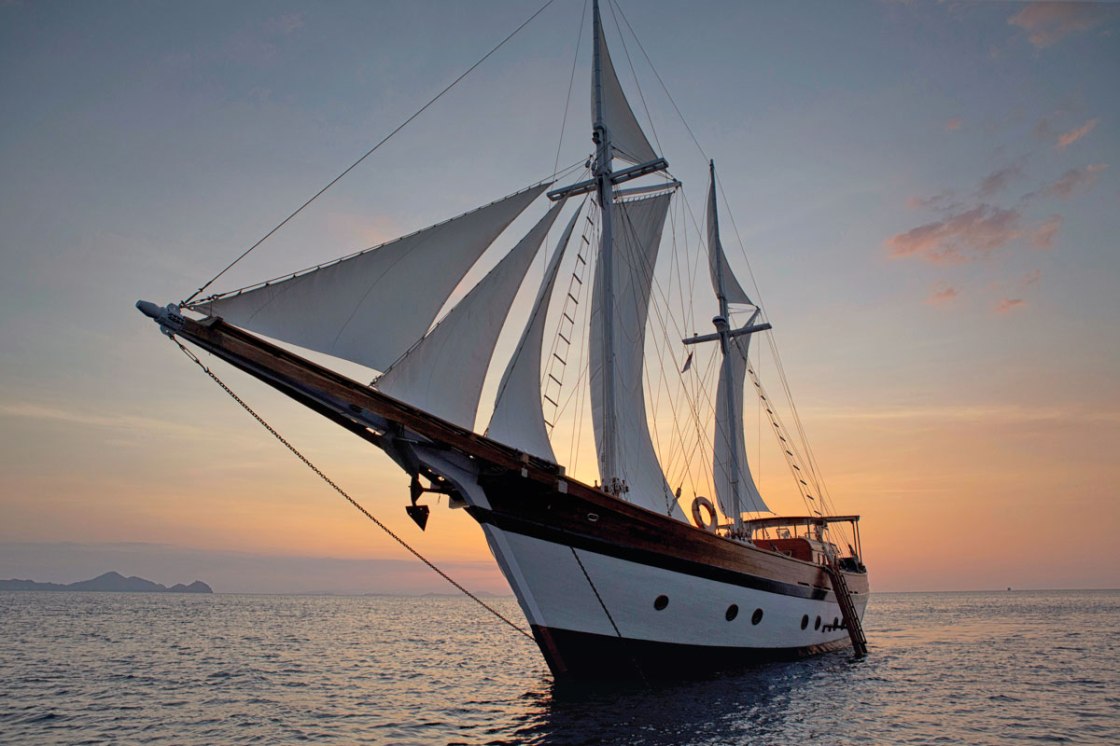 We are delighted to introduce the newly built 23 meter Mantra liveaboard vessel who will be sailing the best dive sites in Indonesia. With only three cabins she can take between 6 and 10 persons and never more than 8 divers at anyone sailing. She is perfect for private charters with family, friends or if you prefer join her on one of the scheduled trips. She would be perfect for photography charters or for those that like to have input in their own itinerary.

We’ll give you an insight into the routes as they’re planned, and which diving spots are visited during our liveaboard journey. However, depending on currents, visibility of the water, and weather conditions,changes in the schedules can be made to the planned itinerary.

The diving sites around the Indonesian Archipelago are based on liveaboard experience. The Mantra crew use the maximum time for diving and combine the dives with must see places on the mainland. The amazing beaches, pinnacle scenery, and little remote islands make the experience even more precious. The school of fishes, dolphins, sharks, turtles, corals, and luscious reef make the diving experience unforgettable.

Sail with the style! We offer you considerable room to move around in the cabins, and areas available for lounging, dining, entertainment such as friendly card games, television and movies, or simply warm gatherings with refreshing cocktails at you hand. There is a great deal of room to relax and take in the soothing scenes and atmosphere of unspoiled islands.

Embodied in a pristine 75 feet wooden yacht featuring graceful lines reminiscent of a traditional Phinisi schooner. This classic style harks back to these great vessels of the Bugis tribe that once ruled the waves during the historic spice trade.

Combining classical appeal with 21st Century technology, Mantra was masterfully crafted on a Sulawesi beach and features a low superstructure with a large deck from bow to stern, resulting in a ship that offers not only a majestic retro form, but also safety for serving private magical journeys.

The Mantra has been beautifully designed allowing ample space for all you need but not wasting space for the things you don’t need.

The yacht features three cabins, each with private bathroom and AC. The teak wood interior is toned with traditional Indonesian patterns giving the feeling of warmness and comfort. Each cabin consists of Queen size bed and one or two bunk single beds on the sides. The Cabins are cleaned daily, with towel and sheets changed on your request, with a desired frequency.

Cruise in comfort and enjoy spacious interiors on board with Mantra, which accommodates six and up to ten passengers. It’s perfect for 3 couples with kids, or close circle of friends who can share the comfortable cabins.

Beside comfortable and spacious cabins, you can spend the time in the indoor lounge that can be a perfect space for the entertainment during the night. You can also choose if you will dine outside or inside, since there are dining tables both in the lounge area and on the deck.

Available at all times is our Library that focuses on diving and sailing, as the snorkelling and fishing gears that you can use any time you want. The yacht gives so many opportunities, all designed for maximum comfort and pleasure.

Diving :
The crew on board are internationally certified dive master who can guide you through the magnificent diving spots. Dive tours are for max 8 divers on boat and they are equipped with diving cylinders, a Bauer diving compressor and weight belts. In case you don’t have your own equipment, we can assist you with renting it for 35€/day, all you need to do is to inform us in advance. There is a 6 meter RIB with a 40hp engine to drop you off and pick you up at the dive sites.

Dampier Strait
This site becomes more and more popular, as it amazes the divers with the biodiversity of several oceans meeting up. You’ll meet schools of fusiliers, surgeonfish, trevalliers, rainbow runners, sweetlips and bannerfish. Particular thing about the site is that you will be able to hear “fish thunder”, the loud sound made when great numbers of fish move through the open water.

Penemu
During one survey undertaken by regional authority on fish identification, that took only 4 days and 11 sites, the scientists recorded a total of 707 fish species in the 5600 ha of Penemu protected area. The average number of species on sites was 281 species, which is considered as exceptionally diverse. On one site they noted 357 species, and that makes it the second highest fish count on one dive.
In Penemu, there is an amazing variety of reef types, and this is why the site around are so biodiverse. The hard corals are home to Indian lionfish, as well as several species of dragonets, and for attentive ones the Pontohi pygmy seahorse.

Farondi
Farondi islans offer many different dive sites, where you can go on the look for wobbegong sharks.
Misool National park: Jilliet, Fiabajet, Walib, Wajil, Jef Pele, Mesenta, Boo.
In these waters is the best visibility around Raja Ampat, up to 40 metres.
Gorgonians, barrel sponges, dendronephtya soft corals and various forms of acropora, schools of unicornfish, surgeonfish and blue dash fusiliers swarming around you, green turtles, blue and yellow angelfish, titan trigger fish, oriental sweetlips and many species of butterflyfish. You can stumble upon huge Platax teira batfish, or great hammerhead sharks. Now, rare in most of the places in the world, Napoleonfish is quite common in Raja Ampat.

Fam South
Angelfishes in all the wonderful colors and forms, “bicolour” –yellow and blue halves, “keyhole” –navy with a white ‘keyhole’, “Lamarck’s” –black and white stripes, “3-spot”- bright yellow with blue lips. Masked rabbitfish swimming in pairs, black and white banded sea snakes, and one true rarity around the ocean are tridacna clams, some being over a meter long and as it is believed over a 100 years old.

Arborek
Hard coral gardens of Arborek are permanently visited by Manta Rays, and it’s possible to see 10 to 15 of them only in one dive. Beside this particularity, you’ll be able to see the thousands of Oxeye Scads.
Komodo Island – Diving Sites

Gili Lawa
Schools of jacks, giant trevally, and white tip reef sharks, surgeonfish, smaller reef fish that float amongst the fields of staghorn coral. Dolphins will make an appearance, often chasing the large schools of fusiliers. The reef is full of bronze and rust colored sponges, soft tree corals, and in the shallow water there’ll be thousands of anthias. Damselfish, large cuttlefish, pyramid butterflyfish, hawksbill turtles and some red octopus’.

North west side of the island is interesting for Schools of yellow-ribbon sweetlips, black snappers, bluefin and bigeye trevally, and white tip reef sharks.

Castle Rock is more exposed to the currents, but great site for experienced divers. There you can see whitetips, blacktips, grey reef sharks, and big trevally. It’s also a favorite hunting place for bottlenose dolphins that can be spotted often while diving.

Komodo National Park
The liveaboard experience gives the opportunity to visit all he interesting dive sites around Komodo island.
On Monco, there’s miniwall with cracks full of glassfishes. It is a really good place for looking at smaller animals like batfishes, tiny shrimps, nudibranch, also having black corals. This site is also good for night dive.

Padar and Rinca
With a number of rocks and swimtroughs, there’ll be bunches of brown leather corals, bright yellow sea cucumbers, red and purple urchins are quite common. The schools of fusiliers, snappers, six banded angelfish and boxfish.

Rinca North
While diving in the waters of area of Rinca North you’ll be able to see the jawfish, sand eels, bumphead parrotfishes, butterflyfishes, often sharks and groups of jacks, grey and humpback snapper.

Koon
Dog-toothed tuna, schooling barracuda and jacks, and specially you should look for ghostpipefish, and orangutan crab. There will be numbers of red-toothed triggerfish, surgeonfish, huge trevallies, and giant morays. Seascape is filled with hard and soft corals, including ubiquitous orange dendronephthya, and cabbage corals.
The other spots for dive will be around Banda Neira outer reefs, Misool National park, Farondi, Fam Island and Arborek. These places are described as great biodiversity sites, and are the part of the diving tour of Raja Ampat or Banda Sea. Some of the species more worth mentioning are Clownfish, Mototi Octopus, Chromodoris and Moray Eel.

Komba island
Komba Island and it’s volcanic scenery, with black sand and colorful corals. There are many kinds of Dartfish, like Fire Dartfish, Spottail, Twotone and Zebra Dartfish.

Gunung Api
Amazing Gunung Api, even it was destroyed by eruption, the reef recovered so fast, on amazement of scientists. Here you can find rich marine life, with table corals being big as houses, and cabbage patches looking like underwater fields. Fusiliers, greensnout parrotfish, slingjaw wrasee and cuttlefish, triggerfish, and even clown triggerfish can be spotted here. If you’re persistent enough, you’ll be able to see longnose hawkfish.

Suanggi
Incredible site and all it’s species, with the list that would go on and on. Nevertheless some of them we’ll mention, as they’re not so common to find. The species like midnight snapper, bump-head and blunt-head parrotfish, turtles and sharks.
The seascape is dominated by all kinds of hard and soft corals, like laminar coral, blue coral, brown daisy coral, dome coral and crispy coral.
The other sites that will be on our route are: Nusa Laut, Molana, and Luci Para.