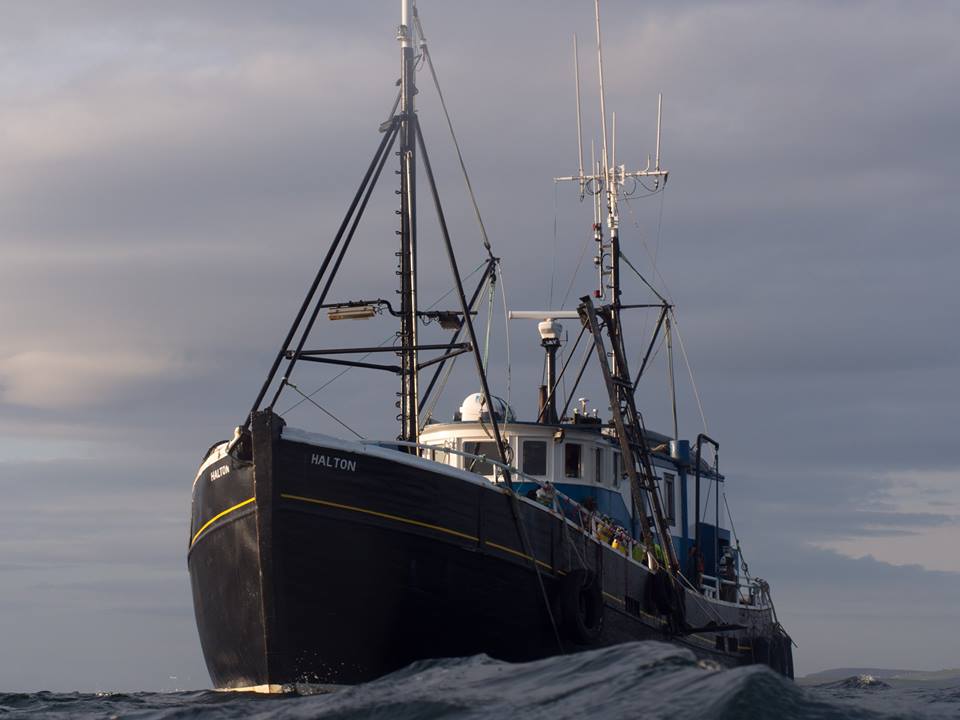 Scapa Flow is the top wreck diving location of the northern hemisphere and home to the scuttled German High Seas Fleet.

On the 21st June 1919 more than 70 ships, almost the entire German Navy, were scuttled under the orders of Admiral von Reuter. Isolated from any source of current news, he feared that the armistice negotiations would break down and took this drastic action rather than let the ships fall into British hands.

Today these wrecks lie between 20-50m below the surface, most in close proximity to the small island of Cava.

Also dotted around Scapa Flow lie the remains of other ships, casualties of different circumstances.

Being almost fully enclosed by a ring of islands, there is a sheltered site in Scapa Flow in almost all weather conditions: the diving season runs from March to November.

The main accommodation above deck comprises of a combined galley and saloon with seating for all the group around a central table. Heating and cooking is on an oil fired Rayburn and food can be stored in either the fridge or freezer. For those that wish to self-cater, all the necessary implements are provided (pots, pans and cutlery etc). Most nights, the Halton is moored a stones throw from a pub so that those of a less culinary bent need never venture too close to the chef type bits.

The deck is laid out with benches down either side to allow divers to kit up whilst seated with the minimum of moving bottles when it comes time for a fill: the boat charging whips are around 5m long and can reach most of the nooks and crannies available for hiding bottles in. Entry to the water is through an opening cut into the side of the boat at deck level and after the dive, divers use the lift (see video below). The wheelhouse sits in the center of the boat which divers are welcome in anytime. Behind the wheelhouse sits a combined toilet/shower.

There are six twin berth cabins below deck, three on each side of a central corridor with the bunks against the hull. At the forward end of the corridor is a shower/loo. Forward of the sleeping quarters is the skipper’s cabin and then a changing area with room to don suits then hang them to dry at the end of a dive.

The main engine is a 232hp Gardner diesel that pushes the Halton through the water at a steady 7kts. The engine room also houses the compressor and silent running generator. The wheelhouse is fully equipped with the usual electronics, including colour sounder, GPS, radar and VHF.

Emergency and first aid gear (including oxygen) are carried on-board as a matter of routine, though divers are advised to bring their own emergency oxygen.

The boat complies fully with the The Brown Code of Practice for the Safety of Small Workboats and Pilot Boats as required by the MCA, certified to 60nm Cat 2.

The German fleet sank at their anchorages around the small island of Cava. Over the years many were salvaged completely, a remarkable story in itself, whilst others were blasted to access the valuable non-ferrous metals inside. Time and tide have also taken a toll, but the most remarkable fact lies in how well preserved the wrecks actually are. These are ships built to withstand the worst of naval barrages and their strength of construction has stood the test of time.

Of the ships left, four are cruisers and three battleships. The cruisers lie in shallower water, between 18-36m, whilst the battleships are slightly deeper. The wrecks were recently surveyed using side scan sonar techniques, the results of which can be seen here.

Seabed depth: 18-25m
Dimensions: Length 152m, Beam 15m, Displacement 5,440 tonnes
Armament: eight 5.9inch guns
The shallowest of the main wrecks, the Karlsruhe is a popular “shake-down” at the start of a diving trip. She lies on her starboard side with the shotline generally kept midships. There is often a slight tide, though never more than a diver can swim against.

The basic structure of the hull is easily made out despite the salvage work that has opened up many areas of the hull, allowing access inside. The two forward guns lie almost on top of each other and are clearly visible.

Seabed depth: 28-36m
Dimensions: Length 152m, Beam 15m, Displacement 5,620 tonnes
Armament: eight 5.9inch guns
The Dresden lies on a slight slope with the bows shallowest which allows for an easy conservative multilevel profile. This was the first dive that I did in Scapa and I can still picture to this day the bows emerging out of the gloom as I descended the shotline.

The two stern guns are still in place and there is plenty of scope to explore the aft accommodation. In the last two years the deck has peeled away from the hull exposing the inner workings around the bows.

Seabed depth: 36m
Dimensions: Length 152m, Beam 15m, Displacement 5,620 tonnes
Armament: eight 5.9inch guns
The Cöln is the most intact of the cruisers and gives the best idea of what these ships looked like in their heyday. The two stern guns are still in place and the bridge and accommodation are remarkably strong. The shotline is normally at the stern.

Seabed depth: 36m
Dimensions: Length 140m, Beam 15m, Displacement 5,856 tonnes
Armament: four 5.9inch guns
The Brummer, like the Cöln, is in good condition with the main structures intact. The best area to explore is forward around the bridge area were the shotline is usually tied.

Seabed depth: 38m
Dimensions: Length 177m, Beam 30m, Displacement 25,797 tonnes
Armament: ten 12inch and fourteen 5.9inch guns
The sheer size of the battleships often intimidate people on their first dive. One drop is not enough to fully explore a ship this big so most people aim for the big 12inch guns at the stern which are easily accessible.

Being shallower, the Kronprinz is often dived first, allowing the diver to get their bearings before tackling the other two.

Armament: ten 12inch and fourteen 5.9inch guns
The Markgraf, like the other battleships, lies upside down so divers need to descend fairly deep to see the main structures other than the hull. The big guns and the casement guns are accessible whilst many divers spend time exploring the insides of this large wreck.

Seabed depth: 45m
Dimensions: Length 177m, Beam 30m, Displacement 25,797 tonnes
Armament: ten 12inch and fourteen 5.9inch guns
The König is the most broken of the battleships and for that reason the least dived. Although untouched by Cox and Danks, Nundy Metals placed charges against the hull to access her innards. Despite this there is still plenty left to see.

Seabed depth: 18m
Dimensions: Length 260ft, Beam 30ft
Armament: two 105mm guns
Most notable of the other sites is the F2. The F2 was a WW2 Escort Boat, handed over at the end of the war as part of the repatriations. Moored just off Lyness, she sank in 1946. A barge used to salvage her sank in 1968 and remains there to this day.

This site can be dived at any state of the tide and, being very sheltered, in almost any weather conditions. Being shallow, it is a perfect afternoon dive.

The Week on board.

A weeks diving usually runs from Saturday to Saturday to fit in with the ferry timetable. The Halton is based in Stromness so is only a short walk away from the St Ola.

Diving starts Sunday morning and the choice of destinations is fairly flexible: the only real constraints are the times for slack water and the weather. The usual choice is for a deeper dive in the morning followed by something shallow in the afternoon. Surface intervals can be tailored to suit, and usually incorporates a stop off for lunch. The important point to stress is that all the arrangements are flexible and can be changed to suit individual requirements.

Many folk have been to Scapa Flow before and have a good idea of what they would like to see. For those that are new to the Flow, the skipper can advise the best plan of action. It should be possible to dive most of the German Fleet and Burra Sound in the week.

The Halton is equipped with a central spine ladder to recover divers from the water. Although it can be intimidating at first, the ladder is quickly mastered.

Scapa Flow has a reputation for being deep dark and dangerous. The reality is very different: with such a varied range of sites almost all grades of diver can be catered for from novice to trimix. Often neglected are the scenic sites which match anywhere else in the UK.

All in all, Scapa Flow is the perfect dive destination, sheltered from the weather, no tide times to worry about on the German Fleet and a range of dives from 0-60m!

Bottles and weights and gas

There are twelve 12L cylinders provided aboard the Halton and air fills for the week are included in the charter price. Lead weights are also available in 4 and 6lb (2 and 3kg) blocks: please bring your own belt.

Oxygen
Nitrox
Nitrox is also available at a cost of 1p per litre so a 12L of 32% would cost £3.84. If other gasses, such as Helium and Argon, are wanted, please get in touch before coming. You will need to bring your own O2 analyser.

There is a wide selection of accommodation available in Stromness, from B&Bs to hotels. We would be happy to help you book somewhere dependent on your needs and time frame.

Despite the distance, Orkney is well connected with the mainland. There are two main ferry company’s running back and forth to the mainland. We can assist in all travel plans including flights and ferry travel.

The Halton carries an oxygen set for use in emergency situations. There is now a hyperbaric chamber on 24/7 standby in Stromness so help is not far away should the worst happen.

The best vis is at the start and end of the season and can be as good as 20m on the German Fleet which averages around 10m in mid summer. Burra and Hoxa Sounds are always clearer than the middle of the Flow. Occasionally there is an algae bloom, but this rarely lasts for more than a few days.

The temperature varies from 6°C at the start of the season to the warmest of 12°C in September.

The MV Halton is perfect for charters and groups of friends who wish to dive the German High Seas Fleet. It is strongly advised that interested parties contact us early to secure their preferred dates. For individual bookings (non charters) we have a few other operators we can use should the MV Halton be booked up.